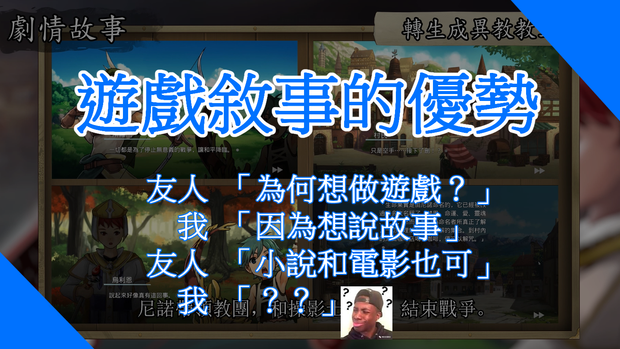 Someone once asked me why I develop games. I told him that it was “Because I want to tell a story.” The person merely replied, “You can do that with novels or movies as well.”

It isn’t strange for someone to think that. Recently, there is a trend of storytelling games becoming more movie-like in nature, a lot of chart-topping games are essentially using CGI movies in combination with QTEs (Quick-Time Event) to create interaction scenes. But it is the overly brilliant camera movements and angels that nullified the visual impact of QTEs. That is also why younger players tend to associate storytelling through games with watching a movie.

Due to that, let us discuss about just why advantages do games have over other media for storytelling.

1. Interaction can help players understand the logic behind everything

Like many others, I would summarize a game as “taking actions, getting responses”. For example, when you play Mario games, pressing down the right key will move you forward, which helps you to understand that the left and right keys are keys for movement in the corresponding direction.

This sort of response will make it easier for players to understand the logic of things compared to watching a movie. In a movie, events will only take place once chronologically, so the audience might not have been able to fully grasp the impact the event has on the entire plot.

However, games are different. Players are able to replay the scenes multiple times in order to fully understand the plot from various angels.

The game Life is Strange allows players to rewind time in order to change what happens in the future.

The player is able to constantly influence the different events surrounding the main character in order to understand her relationship with others, her social status, his values etc. The player will also be able to understand exactly why something happens through the process of trying to stop the event from happening in the first place.

For example, if main character’s friend commits suicide, the player will need to think about what needs to be changed in order to stop this from happening. Did say the wrong thing? Or did they accidentally trigger the friend in some way? Unlike movies, the audience must think for themselves and take action, instead of just being told what is what.

Episode 1 of Life is Strange is free, so check it out!

2. Events are more realistic for the players

Unlike the above mentioned Life is Strange, Florence is a linear game. The player is unable to influence the main character’s movements and decision, they must instead follow her line of thoughts.

During the chapter when the main character welcomes her boyfriend who is about to move in with her, a problem arises – they don’t have enough storage space. She originally lived alone, and now she doesn’t have a lot of space to place her boyfriend’s things. The player must then decide what they need to put away in boxes, and what must be kept. During so, the player might find it very annoying, because there seems to be a use for everything, but there just isn’t enough space for all that.

This is a problem that is very hard to actually express such a situation so realisticly because the audience is not placed in the situation, making it very hard for them to remember such details.

In Florence, the player must decide what is placed in box, and what is left outside.

At first glance, this might seem like the same as the previous, but that isn’t the case.  Whether someone feels like something is realistic is not the same as whether they feel like they are experiencing the same thing. I’ll use above-mentioned event in Florence as an example once again. You might think that what the main character goes through is very likely to happen, but if you have never dated someone before, you might not understand what she actually feels.

This is where I must praise the game We Become What We Behold, a free game on itch.io It is definitely a textbook example. (Spoilers ahead, you have been warned).

The player takes the role of a reporter, and is allowed to take photographs of anything, which will then be shown on the news.

The problem is that if the reporter takes photo of peaceful scenes, people won’t react to the news, and the journalist will also be reminded to not take more interesting and newsworthy photos.

As you take more and more photos, you will start to understand what is newsworthy according to the people’s reaction of the news (in game). Violent, negative and emotional scenes are what people want to see, only that is interesting and newsworthy.

As you can probably imagine, the ending will be a society filled with hatred. Because they only received information that helped the hatred grow through the player’s photos.

After playing this game, you will likely start to pity what is going on with society, you’ll realize that the people are just victims as well. The player (the media) is the real culprit here.

I feel like this stems from players understanding that it is something unavoidable and something that they are helpless against. This isn’t a feeling that movies can provide you will. Only when a player goes through endless trials and errors in search of other possibilities before finding the truth will they understand it.

Of course, movies are able to provide you with a similar plot, but will the audience really pity the reporter? No, the audience will only feel that the reporter is cowardly and someone who is willing to give up his morals to get report more interesting news. The reason behind that is also simple, because it is the reporter that goes through the scolding and failures, not the audience.

If you are interested, then you can check out the game in the link below, the whole game only takes around 5 minutes to finish.

We Become What We Behold

A scene from We Become What We Behind, the tagline is “#peace is boring, violence goes viral”

The key process of taking action to get responses is what separate games form other medias. But this advantage is also very unique in that if you don’t make good use of it, then it is a wasted opportunity, you would be wasting a perfectly good medium.

Let me just make it clear right now, I’m not degrading other types of media. The beauty of words in novels is something that games cannot compare with. But this post is about games, so that’s why I didn’t talk about the advatanges and uniqueness of other media types.

Also, someone also mentioned to me that VR movies are able to better at making you feel like you’re put in the same situation compared with normal movies. I agree with this, but since we aren’t focusing on movies today, there isn’t really a point of me bringing it up in the main post.

We Become What We Behold 中文版